Since leaving Harvard last spring, I’ve been presenting workshops throughout the U.S. helping folks communicate, negotiate or lead more effectively. As a result, I’ve been able to see art all over the country.

In the past four months, I’ve taken in Jeff Koon’s self-conscious creations at the Whitney Museum in New York and Andrew Wyeth’s meditations on windows at the National Gallery in Washington, D.C. I happened in on René Magritte’s mysterious surrealism at the Art institute of Chicago and Andy Warhol’s rhythmic Shadows at the Museum of Contemporary Art in Los Angeles. I was introduced to a group of abstract artists at West Hollywood’s Louis Stern Gallery and revisited some old favorites at Indianapolis’ Eiteljorg Museum of Western Art.

Every artist has a reason for creating their work. Karl Benjamin, the mid-20th century California artist whose work was showing at Louis Stern Gallery, says, “I think all of us are confronted with the problem of feeling whole. When you make a painting, you’re so closely identified with it that it is you, and when it’s done and it feels whole, then you feel whole as well. Otherwise, why would artists spend their entire lives painting?” His art is about his own experience, not the viewer’s. There is joy in his expression; his delight in vibrant colors and shapes was passed on to me as I viewed his work. 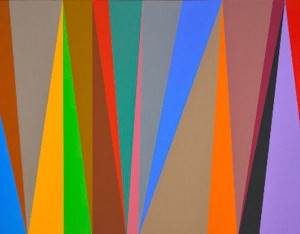 Andrew Wyeth is more interested in the relationship between artist and audience. “I think most people get to my work through the backdoor,” he said. “They’re attracted by the realism and sense the emotion and the abstraction — and eventually, I hope, they get their own powerful emotion.” As I studied his paintings, I was in awe of how his watercolors dissolved into abstract brushstrokes as I drew near and then, as I stepped back, returned to interior or exterior images of windows. I felt sad, yet entranced by the austere beauty of Wyeth’s loneliness. 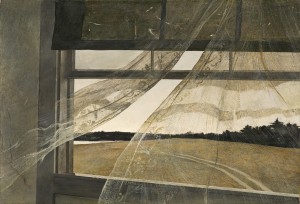 René Magritte denies any meaning to his art: “My painting is visible images which conceal nothing… when one sees one of my pictures, one asks oneself this simple question ‘What does that mean’? It does not mean anything, because mystery means nothing either.” He is challenging the viewer to experience a dreamscape without analysis or interpretation, to see seeing in a new way. However, he is still investigating the relationship between artist and audience. It was an interesting, fun exhibit of trompe l’oeil paintings, surprising, sometimes disturbing, all meticulously painted with a graphic designer’s skill. The installation itself was the masterpiece; as I wandered through the velvety black rooms with light pinpointed only on the paintings, it seemed as if the images were arising from my own dream world. 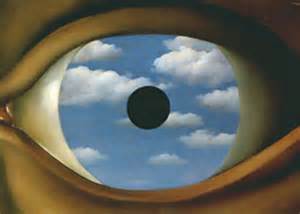 Andy Warhol and Jeff Koons are more cynical about their reasons for making art. Warhol said, “Being good in business is the most fascinating kind of art. Making money is art and working is art and good business is the best art.” Koons builds on this with, “I love the gallery, the arena of representation. It’s a commercial world, and morality is based generally around economics, and that’s taking place in the art gallery.”

However, Warhol’s exhibit Shadows at MOCA in Los Angeles is more than a commentary on pop commercialism. This installation, made up of one hundred and two paintings, is unique in his body of work because it isn’t marketable. It had never been shown in its entirety before. His repetition of a large silk screened calligraphic image under-painted and overlaid with vibrant colors was oddly moving. One curator referred to it as “visual music.” I lingered in the galleries overwhelmed by the scale, mesmerized by the rhythm and seduced by the individual panels. 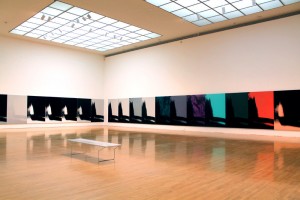 The Jeff Koons’ retrospective at the Whitney was more difficult to become involved in. I felt like I was looking at the work of trickster whose success depended on the craftspeople in his factory. I questioned his insistence, heard over the recorded tour, that his intention is to get people to see everyday objects in a new way. As art critic Jed Perl wrote in the September 25, 2014 issue of The New York Review of Books, “The Whitney’s overwhelmingly middle-class audience is being told that Koons presents a sly critique of middle-class values. Of course everybody can also see that he is having his way with commercial culture — and with us.” Yet, good for him. This exhibit provoked some necessary questions: “Is this art?” “Why is this art?” and most importantly, “What IS art?” 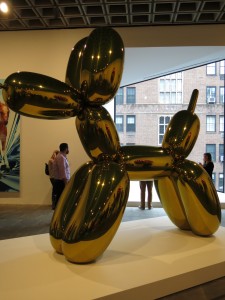 The Eiteljorg Museum in Indianapolis has a different take on everyday objects as art. Instead of being blown up in size or re-made in different media, cookware, clothing, weapons, jewelry, and religious icons of the original peoples of North America are seen as they are. The Eiteljorg doesn’t exhibit these pieces as historical or cultural artifacts, but as art. Tribal areas from Alaska to Mexico, from the Atlantic to the Pacific, are represented in individual galleries.

The name of the artist is sometimes unknown, but his or her hand is clearly in evidence as the maker. The curators describe the influences on the artist as well as various methods of creating each piece. The museum is careful to note that they have partnered with artists and tribal communities to provide visitors with a sensitive perspective. I was overwhelmed by the number and beauty of the pieces on display. I loved considering that an individual artist made each one and, whether a secular or sacred object, imbued it with his or her personal touch. 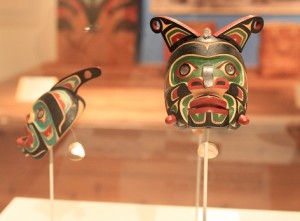 Next Month: Art As Political Act